The woes of not blogging…

So I meant to blog about a gazillion of topics for the longest time. I took loads of fantastic screenshots in WoW and pictures of yummy food, I made notes in my head and still… I never got around to actually really write about any of those topics I came up with! And this since October and it’s the 31st December today! Woah… Ok, so here’s a mumble-jumble list of random thoughts:

In Cooking and Food News:

I made some awesome Pumpkin Soup; I even took pictures and wrote up the recipe. I only have to bring the two together and post them! Will definitely do so, Pumpkin Soup is just too good not to share.

I totally have to FINALLY share the recipe for mustard chicken. It quickly became a standard meal in our house because it’s pretty easy and quick to prepare and tastes fantastic!

I also wanted to introduce you to a traditional festive meal in Switzerland called Fondue Chinoise. We’ll have it for New Year’s Eve and I will totally try and take some pictures!

Tea. Tea is awesome. I love Tea. And we’ve indulged in a Special-T Tea machine from Nestlé. It’s pure luxury and probably a bit decadent – but OMG we love it!

I’m raiding regularily and hey, we’re pretty good at it! I do hate the Heart of Fear with a passion, though. I really do. I even had some crying and swearing fits because of those pixels. Silly bugs in there…

I just recently got my fifth character to level 90 and also got the Double Agent achievement. That’s Tanyankâ (Huntress), Seely (Shadow Priestess), Blackmorgana (Rogue) and Credendo (Druid) on Horde Side and Kytara (Mage) on Alliance side.

I love Blizzards’ Story Telling. It’s so beautiful. I even came to like Anduin. He ain’t dead, right? He will come back and help us kick Garrosh’s behind?

I started to play a little Panda Monk named Shuilong. That means Water Dragon. I got the name from a list of possible Baby Panda names at the San Diego Zoo. 🙂

I love looking for treasures in Pandaria. It helps with the levelling, too!

There are incredible fun items in Pandaria to be found. For example mermaid shells.

Catching every single pet available in all of Azeroth will be a real challenge and I’m sure I’ll need a LOT of patience for it. It helps though to have both Horde and Alliance characters at my fingertips – makes taming some of the pets so much easier. 🙂

The guys at the Ogrimmar Fight Club pack a real punch. Ouch!

And just to give you a pretty picture as well: 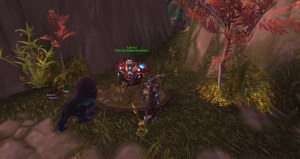 Loh-Ki tells you the story of Alani

This is Loh-Ki. He may be found a bit hidden up in the walls that surround the Valley of the Eternal Blossom. He tells you the story of Alani, the Dragon that flies around the Valley, where you need the sky shards to attack in order to get Alani as a mount. I love those loving details, those hidden treasures in the game.