Sightseeing Azeroth, a new outfit and a Button

This first picture is dedicated to Theanorak from Mysterious Buttons, my old guildmaster from when I was playing mainly Alliance. As the title of his Blog says, he likes buttons to press. Imagine how thrilled he always was with the big red button at  Mimiron in Ulduar…

Well, this one isn’t quite as big, but – ANOOOOO! I’ve found you another button!

This is actually part of a Horde quest in Azshara, where you get to press the button to blow things up. 🙂

Miss Tanyanka felt the need for another outfit. And eventhough she’s a huntress with heart and soul, she never quite understood why she didn’t get to wear skirts. Well, thanks to mogging, she now can. She felt it was time for something blue, and here is her new icy blue outfit: 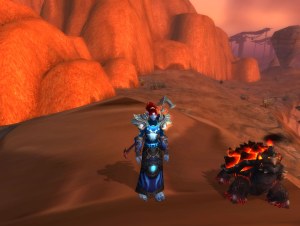 I think she looks real pretty (though a little bit shaman, but who cares…) and her firey red hair sets the blue off nicely. Also, note her back. She’s honouring her Troll heritage with a Sen’Jin cloak.

As far as today’s sightseeing goes – let me show you what impact the Goblins are having on the Horde: 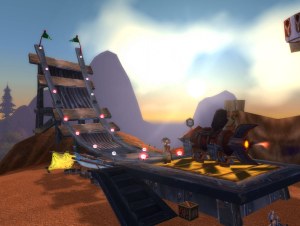 You’ll find a lot of these ramps nowadays with rockets flying you from A to B. But you guessed it – it ain’t that safe, afterall it’s Goblin made! The one pictured above is located in the Stonetalon Mountains. Let me tell you – you better carry a parachute with you when using it! 🙂

Mister Pengu was a bit flabbergasted when visiting Winterspring the other day and he found those critters there:

Yes – I play with the german language pack. But aren’t those names hilarious?! I absolutely love it. 🙂

That’s it with the Sightseeing today. Until next time!